In the summer of 2012, Thomas Fredengren, Head of Fundraising and Alumni Relations at Uppsala University, got a message in his inbox from one of the University’s researchers:

An English journalist is writing an article about my research that will be published in the Telegraph and he would also like to have a fact box about donations, is there something special we should think about?

To donate money to Professor Magnus Essand’s research on viral treatments for neuroendocrine cancer, send contributions to Uppsala University, The Oncolytic Virus Fund, Box 256, SE-751 05 Uppsala, Sweden or visit uu.se/en/support/oncolytic.  Contributions will be acknowledged in the scientific publications and in association with the clinical trial. A donation of £1 million will ensure the virus is named in your honour.

At the time Uppsala University had no online donation function and a Paypal account was hastily set up, on the off-chance that any donations might come in.

The article published in the Telegraph magazine by Alexander Masters was entitled “A virus that kills cancer is waiting to come in from the cold” and was a masterpiece of journalism.  The article went online on August 31st 2012 and in just days, it became one of the top 3 most shared articles on social media. 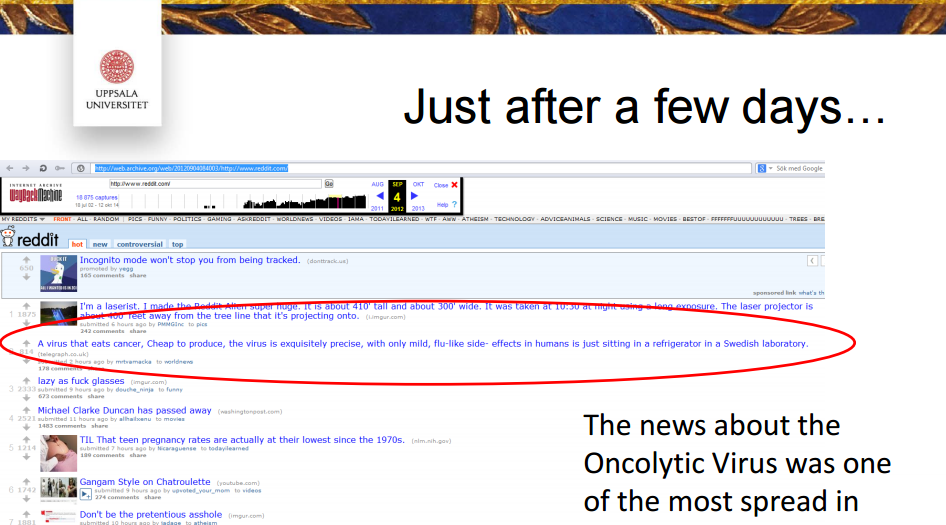 Over the first few days after the article’s publication around 70,000 SEK (€7000) was paid into the PayPal account and the university received numerous offers to crowdfund for the research.

Within a week, several bogus crowdfunding sites were set up and the University realised it had to act quickly to regain control over the situation and meet the need that had been created by the huge  swell of public interest in Professor Essand’s research.

The University got in touch with its Friends of Uppsala University in the US who agreed to help via their 501c(3) and although no similar organisation was in existence in the UK, The Anglo Swedish Society agreed to help and acted as a channel for donations from UK donors.

Video messages were filmed of Professor Magnus Essand and put up on the university website as well as thank you videos, which were sent to every single donor (regardless of the size of their gift).

In spring 2013, the University made contact with a potential major donor to the campaign and by June 15th 2013 (just eight and a half months after the Telegraph article was published) the University was able to announce that a donation of 14 million SEK (€1.4 million) had been made by Vince Hamilton which secured sufficient funding to commence the clinical trial.

In the summer of 2013 the crowdfunding continued, led by an initiative from one family in the US, resulting in a further US$200,000 to the campaign.

Thomas Fredengren  shared his learnings from the whirlwind campaign. It was clear there was huge public interest in the research and that this could be harnessed, in the absence of any interest in the research from the pharmaceutical companies.  He also noted that there was great personal chemistry between Vince Hamilton (their major donor) and Professor Essand and his team, which drove the project on and gave it momentum.

Uppsala University got excellent media exposure and as a result of the campaign internal relationships were developed and a new focus on fundraising was institutionalised.

Crowdfunding however  requires a huge amount of back office resource, as each and every gift has to be documented and taken good care of.  There were inherent risks in how the university brand was used by external fundraisers and the university is now much more prepared to take advantage of bottom- up fundraising campaigns as and when they present themselves.

And Magnus Essand kept his promise to journalist Alexander Masters and threw him the biggest party in Uppsala to celebrate the start of the clinical trials.  And if this story is ever made into a movie, my money would be on Matt Damon to play Magnus Essand.

For more on this campaign go to http://www.uu.se/en/support/oncolytic/